‘Gone Are The Days’ – World Exclusive Premiere for new single on BBC Radio 2! 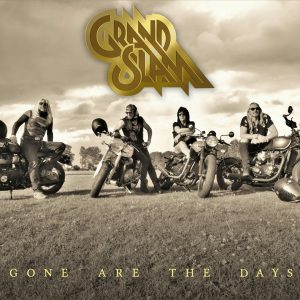 Having inked an exclusive deal with Marshall Records, GRAND SLAM are now delighted to reveal that they will release their first single ‘Gone Are The Days‘ from forthcoming album Hit The Ground on September 6th!

The track will get a world exclusive premiere on Johnnie Walker‘s BBC Radio 2 Rock Show on Saturday 31st August, from 8pm.

Following a critically acclaimed performance at Ramblin’ Man Fair 2019, Grand Slam are in the planning tour dates through 2019 to support the release of their debut album “Hit The Ground” is released through Marshall Records on the 22nd November 2019. The album will be available on CD, LP, digitally and also on Limited Edition Gold Vinyl.

Laurence Archer says. “I’ve been thinking about this moment for many years and I’m so proud of what we, the new Grand Slam, have achieved, “Gone Are The Days” is the most obvious choice for the first release – it’s a song I originally wrote in the late 80’s but with the band we have captured all the new and the heritage elements of Grand Slam and my writing. Grand Slam are back and here to stay.

Obviously at times like this Phil is never far from my thoughts, a friend and a mentor and a hero always.”

Vocalist Mike Dyer says, “Grand Slam is very much a new beast with a love and respect from where the beast was born.

I think it’s fair to say that the five old and five new compositions are honest and true. When we heard some very rough recordings you could hear the potential. I kept feeling that I was on sacred ground and couldn’t touch anything. Even had a few nightmares! Then I thought what a shame if I these marques of songs weren’t ever finished and never saw the light of day. We then went on to discover our very own sound and wrote a plethora of new material that had the essence of the legacy yet sounded fresh and exciting and most importantly really kicks ass.”

‘Gone Are The Days’ is taken from new album “Hit The Ground” out 22nd November via Marshall Records.